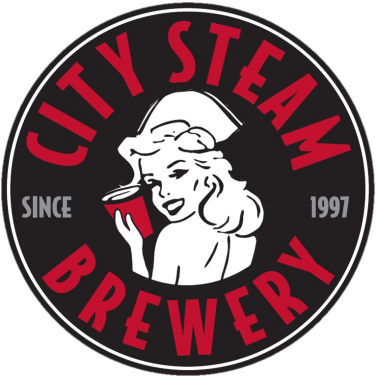 With its upscale casual menu, award winning brewery and historic setting in our 1870’s H.H. Richardson brownstone, City Steam has something for everyone.
... Read More

The Hartford Steam Company supplies economical steam-heating and chilled water for cooling to many buildings in Hartford through a district heating and cooling system. Hartford Steam has engineered a way to run steam pipes into our brewery cafe. Enabling us to power our 23-barrel brewery with “city steam”. You can see the steam firsthand when we blow our antique steam-whistles. And ask our brew master about the technology … he’ll tell you brewing with steam is a dream come true!

When steam was introduced to the brewing process in the mid-1800′s, it was the epitome of modernization. No more stoking fires or shoveling coal to keep the kettles boiling! All a brew master had to do was turn a few valves and the vapor started rolling. Better yet, steam provided a faster, more consistent flow of heat and, in turn, a better brew of beer.

Best of all, whether you’re drinking Porter, Pilsner or City Steam Ale, you know you’re getting the best brew in the state–at City Steam.

Dates of Operation: Year Round