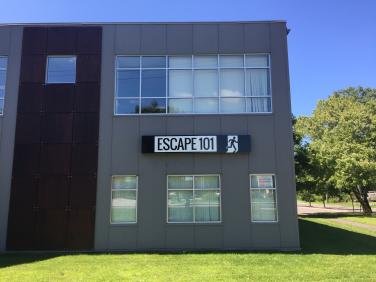 At Escape 101, an adventure will unfold as you watch the seconds tick by. Your mission is simple - collect clues to escape the room as quickly as possible.

At Escape 101, an adventure will unfold as you watch the seconds tick by. Your mission is simple - collect clues to escape the room as quickly as possible.

Escape rooms are perfect for families, friends and corporate teams. In any given scenario, a team of players (typically four to 10 people) enter a theme-puzzle room which is then locked shut. A timer is set for 60 minutes, and in that time, the team must collect clues and solve a series of puzzles in order to retrieve a key or code to unlock the door and escape the room. Each team will have three clues, or "hints" which they can redeem with the help of a game master if they become stumped. Use them wisely.

The Rooms:
The Widow's Room. A doctor has been discovered lying dead in his study and your team has been dispatched to investigate. Upon discovering inconsistencies in the evidence, things take a turn for the worst. Will you solve the murder before it's too late?
Jet Set: You have won a trip to a mystery destination. The catch? You have only got an hour before take off. Finish your to-do list, pack your bags, and you will be on your way. But don't forget your boarding pass, after all, you will need it to escape.