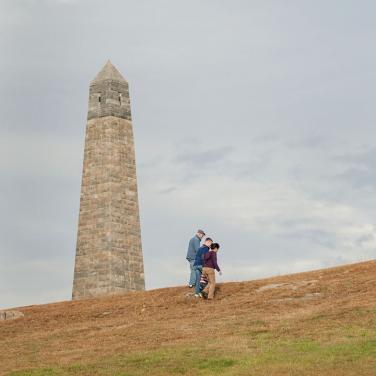 Remains of Revolutionary War fort that was the site of 1781 British massacre of American troops. View of shoreline from 135-foot monument, historic displays, picnic area.

This is the historic site where, on September 6, 1781, British Forces, commanded by the infamous Benedict Arnold, captured the Fort and massacred 88 of the 165 defenders stationed there. The Ebenezer Avery House which sheltered the wounded after the battle has been restored on the grounds. The Monument House Museum has displays of Groton’s history. The Groton Monument offers sweeping views of the fort and surrounding area. Picnic area.

Built in 1775, Fort Griswold still has its original ravelin, ramparts, and stonework. The site of the Sept. 6, 1781 Battle of Groton Heights where 165 American militia faced off against 800 British troops under the command of Benedict Arnold. The militia fought off two attacks but was overwhelmed on the third attack, and American Col. William Ledyard surrendered his troops. He was immediately killed, and most of the American wounded were massacred; 88 of the defenders died that day. While the Monument House Museum and the 135-foot-tall Groton Monument (oldest of its type in the country) closes for the season after Labor Day weekend, the grounds are open to the public year-round with interpretative signage and cell phone self-guided tours available.