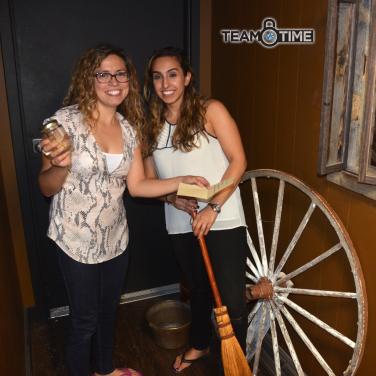 This is an award winning interactive group entertainment experience! It is room escape for the room escape enthusiasts. Explore unique environments, find interesting objects, and use clues to solve a series of puzzles in an attempt to reach your ultimate objective.

Gangster’s Gamble - I smell a rat…
Travel back to decades past, when crime bosses rule the city streets with an iron fist, while the U.S. government takes secret measures to get rid of the mafia for good. As undercover operatives, do you have what it takes to find the evidence to bring the criminal element to justice before time runs out? You know what they do to rats… Either way, it’s going to be a blast!

The Lost Book of Spells - For a charm of powerful trouble, Like a hell-broth boil and bubble.
You may have finally found it—the haven of Rosalind LeFay, a powerful witch who is said to have in her possession the best-kept secret in magical history, the Lost Book of Spells. Can you find the Book and get away before she returns? Whatever happens, you’ll find this experience quite enchanting…

Save the Queen - Discover the plot. Identify the conspirators. Save the Queen!
As members of the royal court, you will travel to 14th-century England, where you have unearthed a diabolical plot to unseat the Queen. Your quest is to uncover the clues and alert the court before it’s too late! May Fortune smile upon you, and God Save the Queen!

The Cure of the Alchemist - Bring out yer dead!
The outbreak of the Black Death has brought citizens of a village to their knees. A local alchemist, said to have otherworldly powers, is rumored to have concocted an elixir that can cure any ailment. Attempts to persuade him to share his potion have been unsuccessful. But can a bottle of the priceless potion be gotten by other means? Will you find the elixir, or will you fail and succumb to the Black Death?