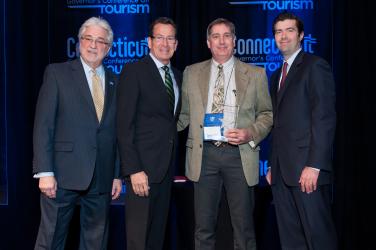 More than 400 professionals from across Connecticut’s tourism industry – a $14 billion sector of Connecticut’s economy – were on hand at the Connecticut Convention Center to honor their peers. Seven individuals and organizations were honored in five separate categories. The recipients of the 2016 Connecticut Governor’s Tourism Awards are:

Other conference highlights included the presentation of Connecticut’s completely redesigned and rebuilt tourism website – CTvisit.com. The new site, a collaborative effort involving the Connecticut Office of Tourism, the state’s many tourism businesses, local associations, other Connecticut state agencies and the regional tourism districts, features more than 4,000 places to visit, stay and eat in Connecticut, as well as hundreds of inspirational travel stories, vacation deals and event listings.

The conference also featured a compelling keynote address from Bruce Turkel, CEO of TURKEL brands, as well as a dozen workshops hosted by state and national tourism and marketing experts.

“As the only statewide tourism industry event, the conference continues to be a helpful tool for hundreds of travel and hospitality professionals,” said Randy Fiveash, director, Connecticut Office of Tourism. “We look forward to building on the insights and momentum gained from the conference to have another banner summer in Connecticut.”

About The Connecticut Governor’s Conference on Tourism

The Connecticut Governor’s Conference on Tourism is the only statewide tourism industry event. It brings together professionals from hotels, restaurants, casinos, tourist attractions, entertainment venues, historic sites, and cultural and arts institutions to share best practices and gain valuable insights from leading tourism and travel experts. The event is produced by the Connecticut Department of Economic and Community Development and Connecticut Office of Tourism, in partnership with the Connecticut Convention & Sports Bureau. For more information, visit www.CTTourismConference.com.