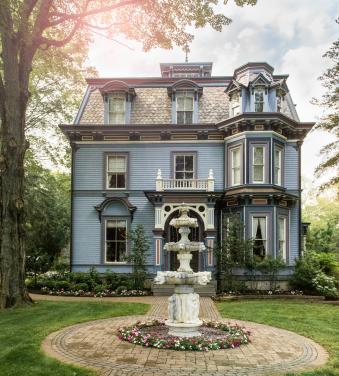 This beautiful home now has 15 rooms including a library with over 1200 books, Parlor/Music room, main sitting room, dining room, six bedrooms, outside deck, the gated property is completely  fenced in. We are now hosting events, weddings, birthdays bridal & baby showers on our grounds.  Call for more information

The Bevin House was built in 1872 by Philo Bevin, who joined his three brothers in the Bevin Brothers Manufacturing Company.  Since 1832, this factory made a wide variety of bells; from sleigh bells, cow bells, tea bells, to call bells and many more.  They were the largest supplier of bells in the early 1900's.  Philo had the mansion built late in his life as a testament to his achievements and to be known as the wealthiest man in town.  Nearly two centuries later, and six generations of the Bevins, they are still producing bells today.  In the 1940's, it was home to Alice Bevin, a world renowned artist.  She was the granddaughter of Philo Bevin and much beloved by her neighbors.  She left a mark on this home by painting murals in the third floor bathroom and in the barn where she had her studio.

The Bevin House is a three-story French Empire style mansion and boasts a huge wrap around porch, original leaded windows, unique architectural details inside and out, a grand central hallway and staircase, library, music room, formal parlor, modern cook's kitchen and original outbuildings.  The mansion has a total of 7,262 square feet, of which 4600 is living space, 12' ceilings 10' arched doors throughout, eight-foot windows, 15 rooms, four-and-a-half baths and seven bedrooms, six of which will be available for guests.  Back in the day, this was the first home to have central heating in town.

This beautiful home now has 15 rooms including a library with over 1200 books, Parlor/Music room, main sitting room, dining room, six bedrooms, outside deck, the gated property is completely  fenced in.