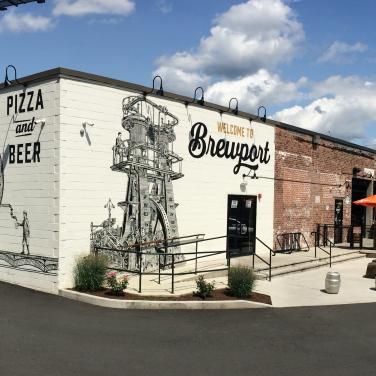 Brewport's building was constructed in the late 1940's as the central distribution point for all the out of town newspapers in Fairfield County.  The main dining area, bar, pizza kitchen, and brewing areas received newspapers twice daily hot off the presses in New Haven, Waterbury, Hartford, New York and Boston  (back then, many papers came out twice a day). The fresh newspapers were unbundled, folded, counted, re-bundled and shipped to newspapers, boys & girls, stores, and vending machines around the state. The metal rolling tables are the old newspaper folding tables. All the woodwork in the building is salvaged paneling from the various offices. We pride ourselves in being historically accurate.

The menus and other supplies are displayed in the old newspaper vending machines. The Bar rails are made from the original steam pipes that heated the building and the basement has remnants of the old coal bin for the steam boilers.  The vast entertainment space was an addition called the “book room.”  The book room was where non-daily periodicals like comic books, Time and Life magazines puzzle books and some paperback novels were stored.