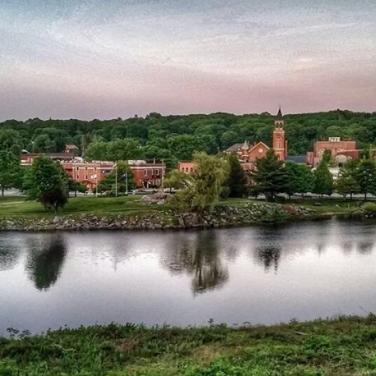 The quaint New England town of Putnam, Connecticut is nestled on the banks of the Quinebaug River.

The quaint New England town of Putnam, Connecticut is nestled on the banks of the Quinebaug River.

Prior to its incorporation in 1855, Putnam was a portion of Killingly known as Aspinock; the town itself eventually forming from parts of Killingly, Thompson, and Pomfret, and named in honor of local Revolutionary War Hero General Israel Putnam.

Due to its proximity to the Quinebaug River, Putnam was on the forefront of industry; with one of the first cotton mills being built in 1806. With the advent of the railroad in 1840, textiles flourished and Putnam became a major industrial force, including providing clothing and other goods to Civil War troops.

In August of 1955, Putnam was devastated when two hurricanes - Connie & Diane – which hit the region within a week of each other. The Quinebaug River overflowed, wiping out homes, businesses, mills, and the railroad beds. Despite the setback, Putnam managed to reinvent itself several times during the 20th century. In the late 1980s, the town became renowned for its extensive antiques market, even becoming crowned the 'Antiques Capital of the East'.

In recent years, the town has been re-inventing itself once again with an 'Arts & Al Fresco' motif – and still boasts a multitude of antique Shops and boutiques. Downtown is home to an exciting assortment of restaurants, bars, cafes, art galleries, boutiques, theaters, and more.