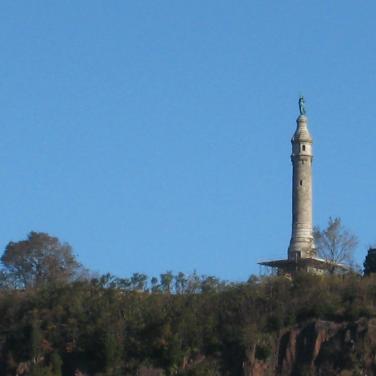 East Rock was formed about 200 million years ago as the continents were in the process of moving away from each other. Molten rock from deep in the earth surged through stress cracks formed in the sandstone bedrock of the New Haven area. The molten rock cooled to form dolerite, also know as basalt or traprock. Dolerite is much more resistant to erosion than the surrounding sandstone. As glacial action and the forces of weathering eroded away the softer sandstone, East Rock (and other traprock ridges such as West Rock) became more prominent. The summit of East Rock Park now rises more than 350 feet above the floor of the Mill River valley at its base.