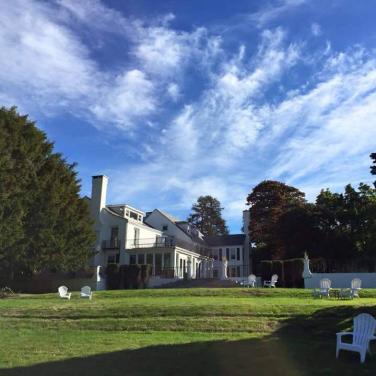 The Gwyn Careg Inn's historic Spanish Garden surrounded by ten foot stone walls, walkways and arches leading into other areas of the grounds, continues to be maintained.  The Garden, in its original form, featured water motes leading to a fountain that was featured in the center of the Garden.  An alcove with pebble mosaic design flooring still showcases as a premier site for wedding ceremonies and photo opportunities.  The backyard was designed as an Italian-style garden cacading down five tiers to a picturesque 2.5 acre pond.

The name of the estate "Gwyn Careg" meaninig "pure stone" in Welsh, was given by Elanor Murray.  She was a former owner and one responsible for the landscaping. Gwyn Careg was known as inland Newport and was considered one of the most beautiful estates in eastern Connecticut.

Today, the Gwyn Careg Inn has been owned and operated by the Bove family since 1999.  The Inn is made available for rental for special events, weddings, overnight stays, and special gatherings.

The Inn is regerstered on the National Historic Registry.