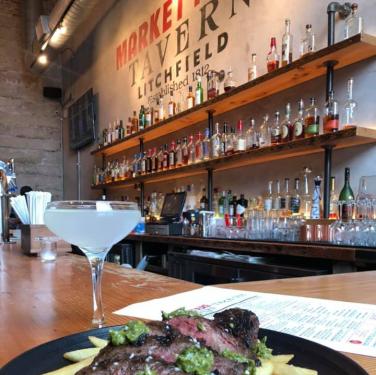 The restaurant is open for lunch and dinner and features “American Tavern Food” with craft beers and cocktails made with local spirits.

The Tavern which overlooks the Litchfield Green is the oldest public building in town and one of the oldest penal facilities in the state.  It was built in 1812 to serve as a jail for British prisoners during the War of 1812.  A cell block and a three-story wing with additional cell blocks, which now is part of the restaurant’s bar area, were added in 1846.  The jail closed in 1992 and was used as a treatment center for men serving prison sentences. It shut down again in 1993 and reopened in 1994 as a rehabilitation center for women facing incarceration. When that center closed, the state decided to sell it.

The interior was designed to preserve the integrity and history of the building.  The jail cells overlooking the three-story bar are still intact, as are the bars on the windows that face the Litchfield Green.  A mix of comfortable leather booths, iron accents, warm brick, and barn wood complete the look.

The restaurant is open for lunch and dinner and features “American Tavern Food” with craft beers and cocktails made with local spirits.