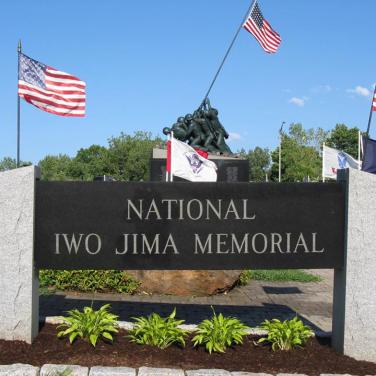 This monument is the only one in the world built by Survivors of the Battle of Iwo Jima in WWII.  It is dedicated to the 100 Connecticut men who lost their lives in that battle and the 6,821 Americans who died there.  The monument is 40 feet high, and flies a 48-star American flag to make the statue historically correct.

Our historic monument depicts the photograph taken by Associated Press Combat Photographer Joe Rosenthal on Mt. Suribachi, Iwo Jima on the fifth day of the battle.  His photograph became the symbol of patriotism, the unity of purpose, and the spirit of victory displayed by all Americans during WWII.  Our sculptor was Joseph Petrovics of Sculpture House Castings, Inc. of New York City.  He created this unique bronze sculpture using Rosenthal’s iconic photograph along with advice from Iwo Jima Battle Survivors.  The Iwo Jima Survivors Association of Connecticut and the members of the Iwo Jima Memorial Historical Foundation Inc recognize the honor, valor and sacrifice of those who fought and died there.

The rocks beneath the statue at the feet of the flag-raisers are from the site of the original flag-raising on Mt. Suribachi.  Volcanic sand from Iwo Jima has been incorporated into the concrete base, making this monument the only one of its kind.  The granite column at the left holds the Eternal Flame. The monuments to the right honor the Navy Corpsmen (medical personnel) and Navy Chaplains assigned to Marine Corps Units.