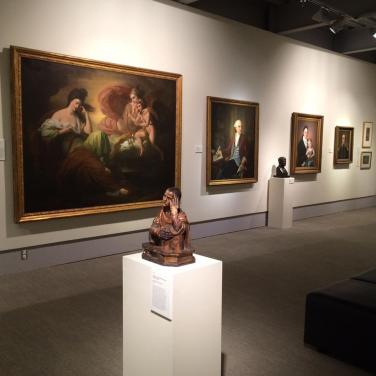 Connecticut's state art museum offers changing exhibitions of art from the 15th to the 21st centuries from its own collection, and from loaned collections.  The museum is family friendly and offers activity kits and scavenger hunts for children, in addition to  lectures, gallery talks, art forums, campus art walks, concerts and... Read More

The William Benton Museum of Art opened officially in 1967 though its roots go back to the early 20th century and the days of the Connecticut Agricultural College, which evolved into the University of Connecticut.

The Museum’s collection traces its beginnings to College President Charles Lewis Beach, who bequeathed his impressive holdings of American art to the University on his death in 1933, along with a trust fund for future acquisitions. His collection included works by Childe Hassam, Henry Ward Ranger, Emil Carlson, Charles H. Davis, Ernest Lawson and Guy Wiggins. In 1965, Dr. Walter Landauer, an internationally recognized geneticist and professor gave the University 107 prints and drawings by the German artist Käthe Kollwitz. In 1966, during the Presidency of Dr. Homer Babbidge, these treasures and the Beach Collection, which by then included works by Mary Cassatt, George Bellows and others, found a home at the museum later named in honor of prominent Connecticut Senator and University trustee William Benton. His family generously donated to the museum some of his sizable collection of Reginald Marsh paintings and works by other important twentieth century American artists.