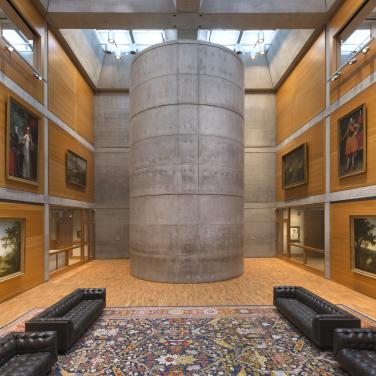 Founded by Paul Mellon (1907–1999), the Center is a public art museum and research institute that houses the largest and most comprehensive collection of British art outside the United Kingdom in a landmark building designed by Louis I. Kahn (1901–1974).

The Yale Center for British Art is a public art museum and research institute dedicated to the study of British art and culture. Presented to the university by Paul Mellon (Yale College, Class of 1929), the collection reflects the development of British art and culture from the Elizabethan period onward. The Center’s collections include more than 2,000 paintings, 250 sculptures, 20,000 drawings and watercolors, 6,000 photographs, 40,000 prints, and 35,000 rare books and manuscripts. More than 40,000 volumes supporting research in British art and related fields are available in the Center’s Reference Library. Works on view include masterpieces by Joshua Reynolds, George Stubbs, Thomas Gainsborough, J. M. W. Turner, and John Constable, as well as major artists from Europe and America who lived and worked in Britain.

The Center offers a year-round schedule of special exhibitions and a robust public program of lectures, conferences, films, concerts, performances, and family activities. Resources include the Museum Shop; Reference Library and Archives; conservation laboratories; a Study Room for examining works on paper, as well as rare books and manuscripts; and an online catalogue of the collections. In May 2016, the Center reopened to the public following the completion of a multiyear project to conserve its iconic Louis I. Kahn building. Admission is free.

Opened to the public in 1977, the Center is the final building designed by acclaimed American architect Louis I. Kahn. It stands across the street from Kahn's first major commission, the Yale University Art Gallery (1953). Located in downtown New Haven, the Center is near many of the city's best restaurants, theaters, and shops.