Stories > A Sweet Day Out – Maple Syrup Farms in Connecticut

Did you know that the "maple syrup" served with your pancakes in a lot of breakfast spots may be anything but? When it comes to real maple syrup, real New Englanders accept no substitute. Taste the difference for yourself with a winter visit to Connecticut’s maple farms and sugar houses. But hurry! The season here is relatively short, from early February until late March, as it requires the perfect combination of freezing nighttime temperatures and days that are warm and sunny. Want to sample some Connecticut syrup for yourself, or better yet, catch the process in action? This March, check out one of Connecticut’s busiest farms and sugar houses!

And be sure to check with each location before venturing out, as hours may change. 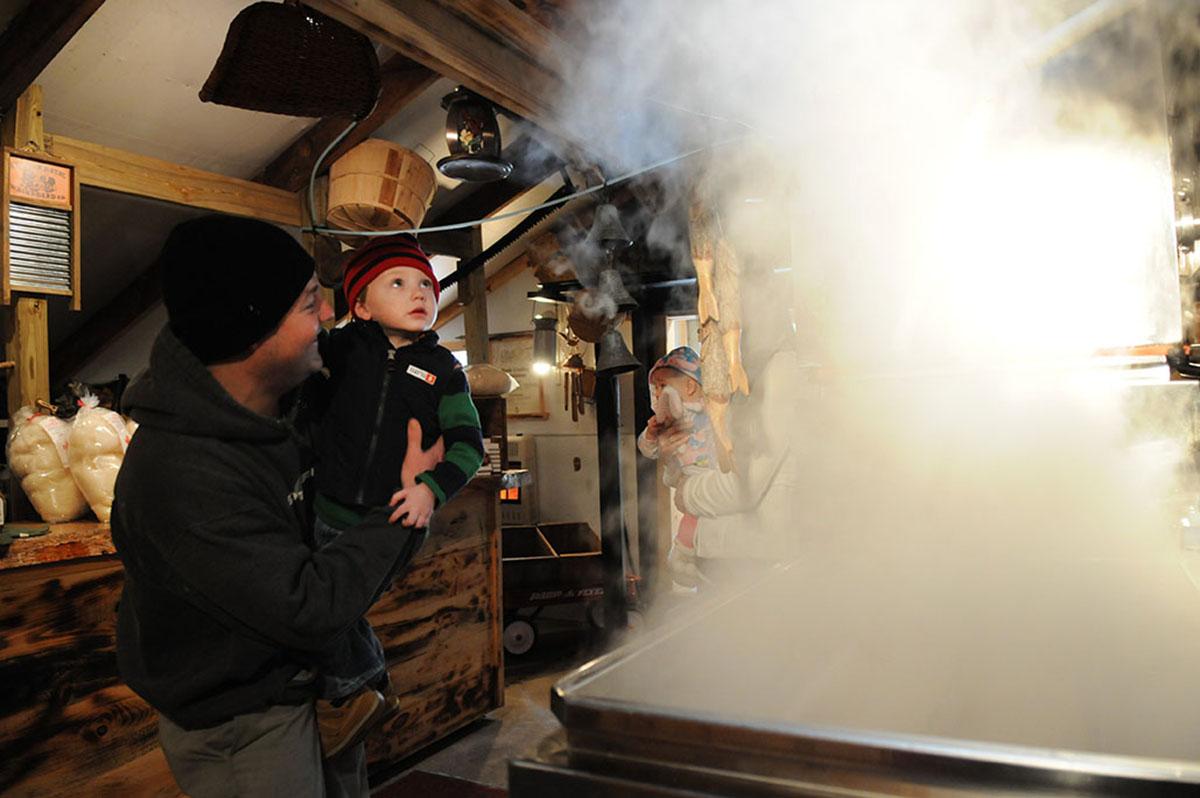 Maple syrup was cultivated by the Native Americans in Connecticut as far back as the 1600s, becoming the new world’s first natural sweetener. Although Quebec, Canada is the world’s leading producer of maple syrup today, Connecticut maple producers hold their own against larger, more visible syrup-producing New England states, such as Vermont. Here in Connecticut, being able to get an up-close look at the syrup-making process before you buy is a big part of the attraction.

“People really seem to enjoy coming out to our sugar house, because it’s a great way to learn how maple syrup is produced and forget about everyday stress.” This year, Lamothe expects to have about 6,000 taps and 26 miles of tubing to collect the sap. He says each farm’s unique process of collecting, filtering and cooking the sap takes patience and can also contribute to the flavor.

“The maple producers in Connecticut are unique. They come from many different walks of life, but they all take pride in what they are producing,” Lamothe says. “Connecticut maple syrup is wholesome and good, with the same high standards as those in Vermont and Quebec, because of the passion we have for it.”

Watch the Syrup Being Tapped

While there are many Connecticut farms that have their own maple syrup for sale in their markets, (as well as maple candy, maple jelly, maple ice cream and other sweet treats), many also open their doors to let visitors (especially children) experience the process first hand. Here are a few sugar houses throughout Connecticut that are open for visits when the sap is flowing. Be sure to call before you go, or check here for an updated listing of maple festivals.

Even More about Maple

Recently, the grading system of maple syrup changed, and now you can select by your preference for color and taste, rather than simply Grade A or B! Find sugar houses and more information about maple syrup  visit the Maple Syrup Producers of Connecticut website to learn more about how maple producers in the state are working to maintain this proud agricultural tradition.