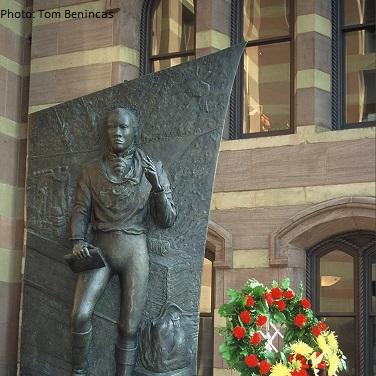 Fourteen-foot, three-dimensional bronze statue portraying Sengbe Pieh (Joseph Cinque), leader of the Amistad Revolt. Situated on the exact site of the jail where the captives were held.

Sculpted by Ed Hamilton in 1992, this monument of Senghe Pieh (known as Joseph Cinque) stands on the former site of the New Haven Jail, where illegally kidnapped Africans were imprisoned in 1839 while awaiting trial. The work is a majestic, 14-foot relief sculpture cast in bronze, and distinguished by its unique three-sided form, each side highlighting the capture, trial and return home of Senghe Pieh and his fellow captives.