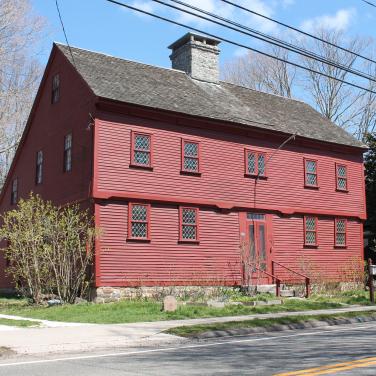 The Hyland House Museum (1713) is an historic house museum. It is is completely furnished with an exceptional collection of 17th- and 18th-century furniture and artifacts.

The Hyland House is an historic house museum, named for George Hyland, the settler who purchased the land on which it stands in 1657.

The two-story saltbox structure was built circa 1713 by Hyland’s son-in-law Isaac Parmelee. The National Registry of Historic Places describes it as a “landmark building in the history of domestic architecture.”  The homestead inhabitants included Ebeneezer Parmelee, a master clockmaker, and Candace, an enslaved woman for whom Guilford’s first Witness Stone was placed in the museum’s front walkway.

The house opened as a non-profit museum in 1918.  For more than a century, the Hyland House has been sharing Guilford’s rich colonial history through tours, events, hands-on programs, classes, and research.

Pricing: Admission is $3, unless otherwise specified. Free admission for tours and programs for visitors under 18 accompanied by an adult.