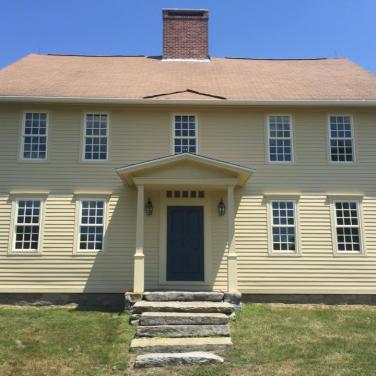 Restored home (c.1769) of the Governor of Connecticut, from 1797 to 1809. The house features eight corner fireplaces and outstanding woodwork carved by master joiner Isaac Fitch. Jonathan Trumbull, Jr. is often overshadowed by his famous father, the Revolutionary War governor. But Jonathan's career was also distinguished by dedicated service throughout the war and during the founding years of the new nation. Jonathan was appointed Paymaster General of the northern department of the Continental Army in 1775 and in 1778 he became the first Comptroller of the U.S. Treasury. In 1781, Jonathan became military secretary to General George Washington, participating at the Battle of Yorktown and the surrender of Lord Cornwallis and the British Army on October 19, 1781. He remained with Washington until the signing of the Treaty of Paris in 1783 and was a trusted friend and confidante of the commander-in-chief. General Washington spent the night of March 4-5, 1781, in his house. Jonathan's national service had show him firsthand the weakness of the Articles of Confederation. He became a staunch nationalist, convinced that the well-being of the new national depended on a strong federal union. He strongly supported the Constitutional Convention of 1878. In 1789, he was elected to the first U.S. Congress created under the new Constitution and was the second speaker of the U.S. House of Representatives. He was later a U.S. Senator. In 1797 he was elected governor of Connecticut and was elected annually until his death in office in 1809. Jonathan Trumbull, Jr. married Eunice Backus of Norwich in 1767. They had five children, but only three daughters survived to adulthood. Their oldest daughter Faith married Daniel Wadsworth, founder of the Wadsworth Atheneum. Daughter Harriet married Benjamin Silliman, first professor of chemistry at Yale College and a founder of the Yale Medical School. Maria married Henry Hudson, son of the publisher of the Hartford Courant. In 1777, Jonathan hired Isaac Fitch of Lebanon to remodel the house. Fitch carved the beautiful woodwork in the two parlors and the cherry staircase in the hall. A new kitchen ell and an ell extending the northwest parlor were also added by Fitch. Over the years. many different owners made changes to the house, reflecting the fashions of their day. Fortunately, the Isaac Fitch woodwork was never altered. The house is now a museum owned by the Town of Lebanon. The house is furnished with antiques and reproduction period furnishing that are usable by visitors. Hands-on house tours illustrate architectural, social and cultural changes over a 250 year period. A Heritage Garden, established and maintained by the Lebanon Garden Club, and a magnificent Ginkgo tree enhance the grounds. Visitors can enjoy the garden year-round and are welcome to picnic on the lawn.