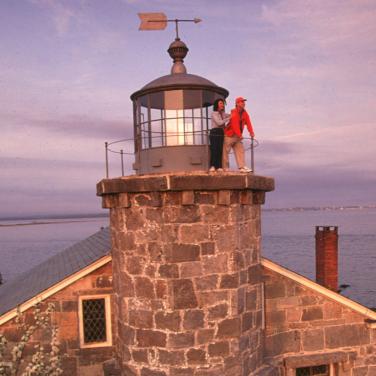 First lighthouse museum in the nation. Changing and permanent exhibits including maritime artifacts and Oriental trade. Seven rooms of exhibits, and visitors may visit the light house tower.

Stonington’s best-known landmark is the 1840 Old Lighthouse, which keeps watch at the south end of Stonington Point. Though diminutive in size, its architecture bespeaks the endurance and fortitude that characterize the town, which repulsed two attacks by the British Navy, first in 1775 and again in 1814. The building became the first museum lighthouse in the nation after the Stonington Historical Society bought it from the federal government in 1925. It has been open to the public ever since and contains exhibits illustrating the history of local farmers and fishermen, sailors and sea captains, explorers and entrepreneurs. Visitors enjoy climbing the 29 stone steps to the tower to look at a sea-girdled view of three states.