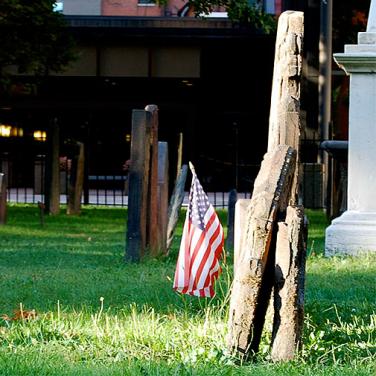 The Ancient Burying Ground is Hartford’s oldest surviving historic site. It was the primary burying ground in the city from 1640 until the early 1800’s. Over 400 gravestones remain today documenting the changing language, use of symbolism and carving styles as attitudes towards death evolved. The Ancient Burying Ground contains extraordinary examples from the golden-age of Puritan funerary art carved by dozens of talented carvers from around New England.

The oldest gravestone is believed to be that for Timothy Stanley, who died in 1648. There is an African-American memorial, a monument to the first settlers of Hartford as well as graves of Revolutionary War veterans. The Ancient Burying Ground of Hartford is an open-air museum so please visit and wander among the stones and reflect on the lives of the people who came before us.

The Ancient Burying Ground is located at the corner of Gold and Main Street, behind the Congregational First Church, downtown Hartford. For a self guided tour, you can download “A Walking Tour of Colonial Stonecutter Art,” go to http://bit.ly/1oDOyDR. Due to the extreme fragility of the stones, gravestone rubbings are not permitted.