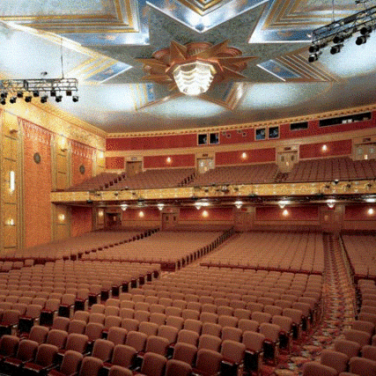 This Art-Deco style theater in Torrington opened on August 19, 1931 as part of the Warner Bros. chain of movie theaters. Today it operates as a mixed-use performing arts center presenting plays, concerts, shows, musical performances and offering classes and workshops.

Built by Warner Brothers Studios and opened in 1931 as a movie palace (1,772 seats), the Warner Theatre was described then as "Connecticut's Most Beautiful Theatre." Damaged extensively in a flood, the Warner was slated for demolition in the early 1980s until the non-profit Northwest Connecticut Association for the Arts (NCAA) was founded and purchased the theatre. The Warner reopened as a performing arts center in 1983, and restoration of the main lobbies and auditorium was completed in November 2002. In 2008, the new 50,000 square foot Carole and Ray Neag Performing Arts Center, which houses a 300 seat studio theatre, 200 seat restaurant, and expansive school for the arts, was completed. Today, the Warner is in operation year-round with more than 160 performances and 100,000 patrons passing through its doors each season. Over 10,000 students, pre-K-adult, participate in arts education programs and classes. Together, with the support of the community, the Warner has raised close to $17 million to revitalize its facilities. NCAA's mission is to preserve the Warner Theatre as a historic landmark, enhance its reputation as a center of artistic excellence and a focal point of community involvement, and satisfy the diverse cultural needs of the region.